Your On-Camera Performance: You Can Take It Sitting Down

By Speaker DynamicsJune 13, 2018Blog
No Comments 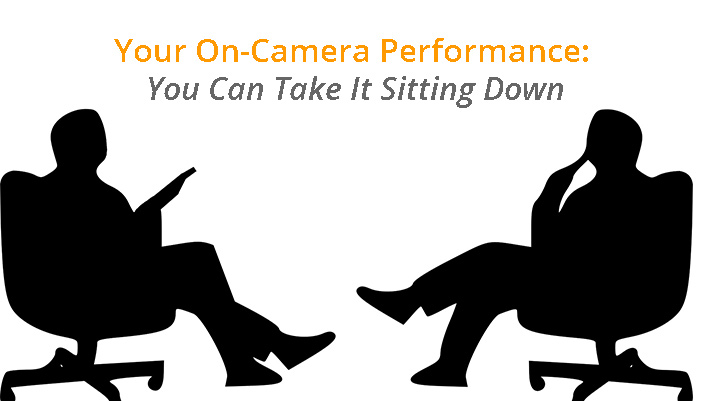 Speaking on camera while sitting might seem an easier approach than standing. After all, you don’t have to think about finding your default stance, rocking yourself silly, or walking out of the frame. However, sitting has its challenges, too. This week, let’s take a quick look at a couple of issues related to sitting and performing on camera, and how you might address them.

Is it appropriate to cross your legs when on camera? This is a question I am asked on a regular basis.

As a young lady, you are often taught to cross your ankles, not your legs at the knee. However, I have always found that advice challenging on camera because form follows function.

When I am performing on camera with a script, I like to keep a hard copy in front of me as a safety net in case the teleprompter fails or adjustments need to be made on the fly. Often, this means I keep my script in my lap. If I keep my legs flat or simply cross my ankles, it’s hard for me to glance down at my script without it being noticeable.

Crossing my legs at the knee lifts my script high enough that I can refer to it quickly and practically imperceptibly to the audience.

For men, the same rule can apply. However, if you cross your legs with your ankle resting on your knee, be aware that in some cultures, showing the sole of your shoe can be offensive. Make sure the bottom of your shoe is angled away from the camera.

Leaning In or Out

In earlier articles, we explored the dangers of rocking side-to-side while presenting on camera. Now let’s discuss what your body language says when you move toward or away from the camera.

Just as Facebook chief operating officer and author Sheryl Sandberg suggests, leaning in can be highly effective in the workplace and on camera.

When we are confiding in a friend, we lean toward him or her to signify that we are about to share something important. When speaking on camera, you can use movement toward the lens to invite your audience in and create a deeper connection with your viewer.

One of the more infamous examples of the power of leaning in came in 1995 when CBS anchor Connie Chung conducted an interview with Kathleen Gingrich, the late mother of former House Speaker Newt Gingrich. Chung asked Mrs. Gingrich what her son had told her about then-President Clinton. Mrs. Gingrich said, “Nothing, and I can’t tell you what he said about Hillary.” Chung encouraged her to reveal what her son had said, but Mrs. Gingrich still balked until Chung leaned in and said, “Why don’t you just whisper it to me, between you and me?”

At that point, Mrs. Gingrich opened up and opened a Pandora’s Box.

Who knows if Chung’s body language made the difference, but on camera, you can see Chung physically lean in toward Mrs. Gingrich. She appeared to be trying to cultivate a deeper level of intimacy with her than might be considered appropriate for an interview to be televised to the masses.

Pushing ill motives aside, movement toward the camera and your viewer can make you come across as earnest and genuine. It helps to build trust between you and your audience, which ultimately builds credibility for your message.