Writing for the Spoken Word: Why the Whisper Test Won’t Work 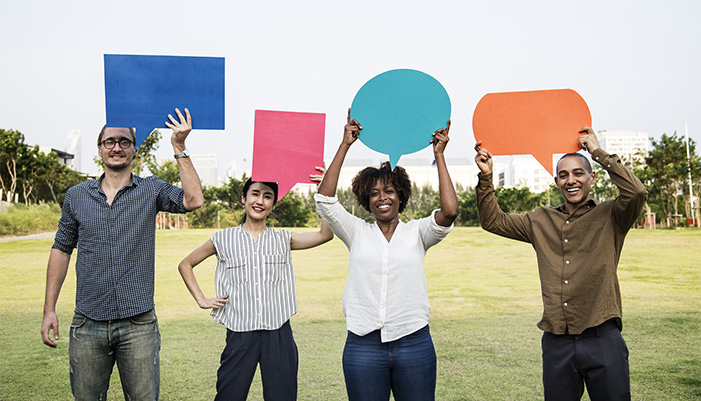 Go into any TV newsroom and, chances are, you’ll see a bunch of people talking to themselves. No, they haven’t lost their minds, at least most of the time. What they’re doing is writing—out loud.

If this sounds like an odd thing to do, remember that anything a broadcast journalist writes is intended to be read aloud, so any reporter or anchor worth his or her salt approaches a script by following this rule:

Write the way you speak.

The same rule applies to anyone who speaks on-camera or to an audience in the same room.

Most prose is never intended to be heard. Instead, it is meant to be read silently—consumed, comprehended, and committed to memory without ever being spoken word for word. Think about your favorite books. Now think about how that same book would sound if someone were to read it aloud. Spoken, the language that seems so perfect—possibly even eloquent—on the written page just might sound awkward, out of place, or be difficult to digest.

Stylistically, the majority of us have never had to consider how challenging it might be to verbalize our writing. A writer’s focus, understandably, is on communicating his or her message in full. If a sentence is three lines long, it’s not a problem as long as it follows the proper rules of grammar and includes all the information the writer wishes to convey. It is a problem, however, if someone has to try to say that sentence out loud and can barely make it to the end without gasping for air.

As a moderator of webcasts, the most challenging part of my job is the introduction of the esteemed panelists. Often, they come from academia and have the requisite litany of degrees, achievements, and awards. Their bios read as though they were lifted from their institutions’ web sites, which they usually are. Few, if any, are reworked for read-ability. Consequently, the person charged with delivering those bios on camera is forced to perform verbal gymnastics worthy of Olympic gold. (Insert a pat on the back for me!)

Almost all business communication follows the same pattern. How something sounds when read out loud plays no role in word choice, but when that same prose is re-purposed to be used on‐camera, the real issue comes to light. While your internal voice is able to glide over almost any conglomeration of words, your audible voice may get tripped up on even the most familiar ones.

For example, in my classes, I often use a stock script with the word “integral.”

Everyone in the class knows the definition of the word and perhaps might even use it in his or her own writing. However, someone always stumbles over it when it’s read off a teleprompter.

The problem usually stems from the fact that there are two acceptable ways to pronounce it (emphasis on the uppercase letters): in‐TEH‐gral and IN‐teh‐gral. When reading aloud, the brain has to make a split‐second decision on which pronunciation to use, and if it’s not a word you say often, there can be a processing delay. When silently reading it, that’s not such a big deal, but on-camera the result is usually a very noticeable verbal trip—a mangled pronunciation or a very pregnant pause.

The only way to find out where the potential trouble spots are is to give full voice to the copy—and by full voice, I mean full voice. Whispering your way through the copy doesn’t work.

Why the Whisper Test Won’t Work

The first thing I ask my students to do after I pass out a training script in class is to read it aloud. The next thing that happens is the room erupts into a breathy, low‐level hum as everyone starts to whisper their way through the copy. Unless you are planning to whisper on camera, this does you no good. A whisper allows for a multitude of sins: a quicker pace, lazy pronunciation, and a lack of pauses. Speaking in your regular voice doesn’t allow you such leeway.

Any script needs to be easy on the ear and comfortable to the tongue. The only way to find out if that’s the case is to read it the way you will perform it on camera . . . even if your coworker wonders why you are suddenly talking to yourself.

If you found this information valuable, check out my book, On-Camera Coach: Tools and Techniques for Business Professionals in a Video-Driven World, available from Wiley Publishing. On-Camera Coach aims to take the mystery out of communicating through the camera and provides specific tips and techniques that can make your message sing—and you, the messenger, feel confident in a job well done.