By Speaker DynamicsMarch 27, 2019Blog
No Comments 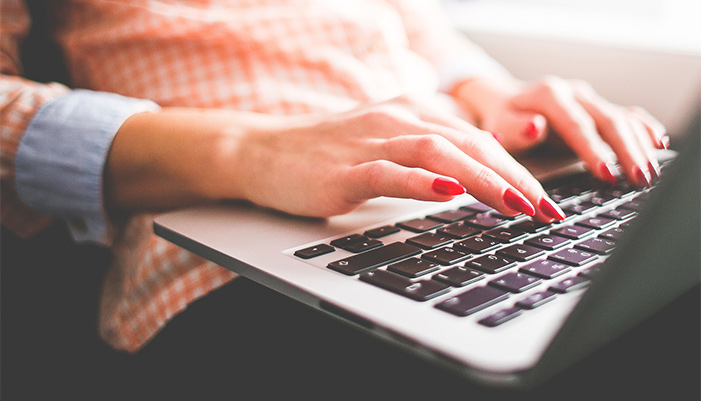 So you’ve been asked to create a short video and the script writing has been left up to you. If you’re tempted to do a cut and paste of a white paper you wrote and received kudos on, stop those keyboard strokes right now.  What looks good on paper often doesn’t sound good when read aloud. Allow me to share a few tips for creating an on-camera script that will make your job much easier come performance time.

Run‐on sentences are a no‐no in any grammar class, and they are when crafting a script for the camera, too. However, the reasons why you want to avoid them may differ.

Long sentences in on‐camera copy create massive delivery challenges. First of all, there’s a physiological one. A period provides a natural break for you to stop and take a breath. With long sentences in a script, if you have to wait too long for that visual cue, your vocal tone may thin as the available oxygen expels from your body.

Second, you can easily lose your viewer when you take too long to connect the dots. Introducing your subject and then adding layer upon layer of descriptive phrases after that asks too much of the audience. By the time you get to the end of the sentence, they may have forgotten what it was even about.

Third, you run the risk of getting lost in the teleprompter (the device that allows the script to be projected in front of the camera so you can look into the lens while reading the scrolling words) because the end of a sentence is nowhere in sight. An uninterrupted string of words can be tough to follow visually. Punctuation helps to break the copy up into manageable sections—for you and for your audience.

Think back to your language arts classes. You probably remember a heavy emphasis on grammar, punctuation, and prescribed formats for each writing scenario, whether it was a persuasive essay or analysis. You didn’t dare have an unclear antecedent, not to mention the horrors of ending a sentence in a preposition.

However, when we speak, our word choice and syntax seldom reflect the formal rules of grammar and structure. And since authenticity is paramount in on‐camera performance success, you need to give yourself freedom to speak authentically. So instead of seeking to speak more carefully when appearing on camera, you should seek to match your writing style with your conversational style.

Everyone has his or her own style of speech. Some of us are more formal, while others of us are more colloquial in our word choice. The important thing is to be true to you. If you write in your own voice, it will be easier to speak what you write.

My performance style is relatively relaxed, so I tend to use contractions whenever possible. For example, if a script says, “I have,” I almost automatically convert it to “I’ve” when I perform it. However, I have had clients who would never contract anything because that would have felt uncomfortable to them. They never use contractions in normal conversation, so doing so on camera would feel contrived.

Let your personal speech pattern dictate your tone, but know that no one is going to call the Grammar Police on you if you end a sentence in a preposition.

The Fun with Dick and Jane books of the 1950s and 1960s provided countless children a smooth path to reading. But they weren’t exactly page turners. The simple structure of the sentences that followed a predictable pattern made it easy on new readers but did not make for scintillating text.

Variety in your delivery is essential in order to keep your audience’s attention. It is much harder to have that vocal variation when your sentences all follow the same cadence. (“Sally sees Spot. Spot sees Sally.”)

A steady drumbeat of fact, fact, fact can cause your audience’s eyes to glaze over. One sentence starts to blend into another and the meaning behind the words becomes lost.

Give yourself something to play with vocally by changing up your sentence structure and intent. Plan power pause moments and employ them. The idea is to indirectly engage your audience by making them think about what you’re saying.

Here are a few ideas:

Your goal as an on-camera presenter is to engage your audience by delivering your content in manageable chunks.  Present your ideas in short, concise sentences, that speak to your authenticity.  That’s what will resonate with your audience and keep them interested throughout your performance.